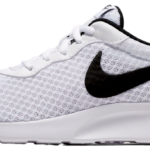 Tanjun is a Japanese word, which means ‘simplicity. This Japanese word inspires the design of the Nike Tanjun. The goal was to make such a shoe that looks simple and provides immense comfort and support to the user. Its mesh upper makes it breathable and lightweight. It is 100% synthetic. The sole is made up of rubber which provides excellent grip and traction to the ground. The cushioning on the shoe is shock absorbent which offers all-day comfort.

Sneaker lovers have stuck with Nike for decades because of its comfort and sophistication. The best ambassador of elegance is Nike Tanjun. The mesh upper and rubber sole gives perfect breathability and comfort to users. Meanwhile, the lace closure offers a perfect fit for the users. The fit of the shoe is pretty much accurate. To assure the perfect fit, we recommend ordering the actual size. The price of the shoe is affordable, and based on the comfort and style it provides, it is a fair deal.

Previous
Next
Shop On: Amazon
Shop On: Zappos
Shop On: Spartoo
Features
Must Know

Nike Tanjun was introduced in 2015 and is very desirable by the users ever since. Its simple yet stylish look along with comfort makes it a perfect sneaker for the user. After reading experts’ and customer’s reviews on this, we can highlight the positive and negative aspects of the shoe.

The following is a video review of the Nike Tanjun. Jacques, the reviewer, provides details review on the shoe. He discusses why the people rate the shoe as the best selling shoe. He talks about the upper, midsole and the outsole. According to him, many people regard Nike Tanjun as very affordable and versatile.

To save you time and effort looking for the exact colourway the guy shows in the video, we have helped you dug it up from Nike Store. You can see the image in the front here. Check it out if you fancy it.

Size and Fit of Nike Tanjun

There are men and women versions of Nike Tanjun. Both genders can experience the flexibility and comfort. The lace closure enables the user to set the fit according to their needs. Its Dual Ride system provides all-day underfoot comfort.

Wearers can enjoy the comfort and style which the shoe provides. The flex grooves at the heel and extra cushioning on the collar give the wearers a smooth ride.

Nike Tanjun is a perfect example of the shoe that provides everyday comfort along with style. With its wide range of colour schemes, the users can pair it with any kind of casual wear. Its comfort allows the users to wear it all day and still rock an outfit. Both men and women have kept this in their wardrobe because it is very lovable in the summer and spring seasons. It allows both men and women to dress stylishly. Despite being stylish, it provides the perfect protection of underfoot and responsive bounce. Both are pretty essential for a running shoe.

The midsole of the shoe is constructed just like its outsole. Made from EVA foam providing comfort and ease. EVA foam is a lightweight polymer that keeps the weight of the shoe considerably light. The midsole also provides flexibility which results in perfect cushioning and comfort.

The outsole of the shoe is also made up of EVA foam that makes the shoe lightweight as well as water-resistant and durable. The flexibility of the shoe is a result of the new Nike Flex Grooves. In the end, the waffle pattern of the outsole enhances traction.

Adidas and Puma have been dominating the sneaker market ever since. In the late 1960s, there was no name for Nike. Phil Knight, the founder of Nike, thought of entering the sneaker business. He was very well aware of the competitors. He had an idea that could help him compete with the others. So, he thought that shoes have to be more comfortable, high quality and affordable to compete. Japan was the best option to flourish his idea, but lack of money was a setback.

Nevertheless, he went to Japan and closed a deal with Onitsuka Tiger, a subsidiary of a sports brand. After investing the money, Phil Knight with Bill Bowerman found Nike in 1964. And the rest we know is history. The idea was to create such sneakers that could grab the attention of people. It should provide the best experience of comfort and style.

One of the most favourable sneakers of the people is Nike Tanjun. Tanjun was created in collaboration with the Japanese. As the name states “Tanjun”, which is a Japanese word meaning ‘simplicity’. The shoe is what its name suggests, simple. Made up of upper mesh and holding midsole, it provides the best comfort anyone can have. Despite being simple, it was very much loved by the people and is a huge success.

Nike is now one of the most favourable brands of sneakers. Famous for its design and prominent Swoosh sides, Nike Tanjun is one of the lightest shoes of Nike, which goes with every causal dressing and portrays a look of comfort and style. It was released in 2015 and is trending ever since.

Overall, Nike has done an outstanding job in designing the Tanjun. The shoe is simple and provides excellent comfort due to its mesh upper and polymer outsole. The mesh upper offers superb breathability, which keeps the feet dry and cool. The price tag of the shoe is pretty decent. Keeping all the qualities in mind, Nike has done an excellent job to attract sneaker lovers.

What do you think about the Nike Tanjun? Leave a comment and provide a rating with the rating scale just after the comment section.