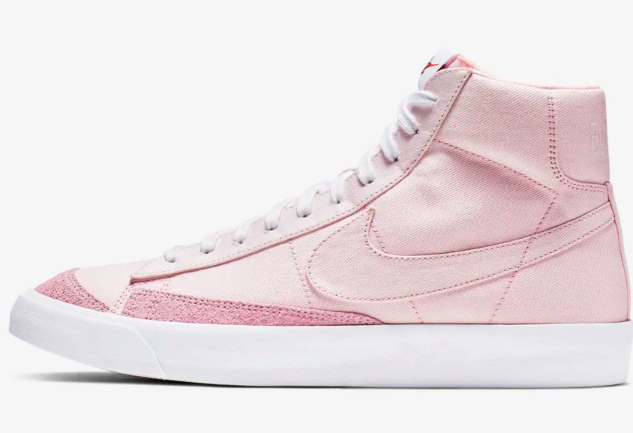 Nike released the Blazer Mid ‘77 Lucid Green and some other colourways early this year. The footwear has the retro look of the basketball shoes in the ’70s and ’80s. Nike claimed that the shoes represent the throwback of the ’70s and ’80s Blazer Mid ’77.

As an addition to the previous iteration, the footwear brand has decided to release the “Pink Foam” colourway and some other good looking colourways, the “Black Canvas” and the “Sail”.

The Blazer Mid 77 Pink Foam comes with the traditional lacing system and a tongue featuring the Nike logo. The shoe features Pink Canvas upper and hairy suede overlays on the toe box and forefoot area, just above the clean white midsole. When you take a look at the heel, you would notice the words, “Blazer” on the left shoe and “1977” on the right shoe. These words are printed on the heel to remind the fans of the year the original kick was first released.

The Pink Foam colourway is already released. Have a look at the release date and the place to buy below.

Nice review. I like how you even went into detail as to when the shoes where made. I know that is important to some people when purchasing, and I am bookmarking the site for sure!

I am a fan of Nike Shoe, but I usually buy jogging shoe only. Didn’t know that Nike is coming up with this retro looking shoe, you have written a very good review on this shoe.