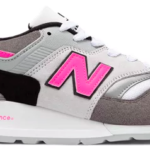 New Balance 997 (Made In USA) was designed by Steven Smith in 1990. it was widely available in the markets in 1991. Now, you can imagine that it was introduced in the market almost 30 years ago. It has undergone many improvements and changes over the past three decades.

There were many ups and downs over the period and the New Balance 997 market was affected by competitors and it was not even in the catalogues. At last, it made a successful return in December 2014. Now, it is one of the most preferred comfortable sneakers for day to day and sports activities.

The company considered quality and comfort as important factors. They tried to improve the quality and comfort level day by day. Their innovation and new technologies have now made the New Balance 997 more comfortable and durable. Surprisingly, it is very lightweight and stylish. Now, these are preferred due to their comfort and look. The appealing and stylish look is amazing for everyday wear.

Previous
Next
Features
Must Know

We have spent a few hours on analysing the reviews and feedback from customers, users and collectors. We have drawn some positive and negative opinions of the users. Let’s summarize them for your convenience.

Here is a video in which a reviewer talk about all that is needed to know about the New Balance 997. He also shows how the sneaker looks on feet.

New Balance 997 comes in different sizes, so you can get one for anyone. There are different variants for men, women and children. There is a wide range of women collection. You can find all sizes in New Balance 997, 997H and 997 Sport. These are available in online stores and you can also buy them in-person from markets. Most users have experienced a perfect fit while some customers claim that they run a bit narrow. So, if you have a wide foot, then you can go for one or half size up. However, if you have a narrow foot, then this will fit perfectly.

The style of the New Balance 997 is quite appealing. It has different colours and shades. Even the sole is made of more than one colour. Like all New Balance shoes, this one also has a stitched logo on it that looks amazing. Men can wear them with jeans, chinos, shirts, t-shirts, hoodies, shorts and other casual dresses.

Women can use them with jeans, skirts, leggings, tops, shirts etc. New Balance 997 also has a wide range of shoes for children and teenagers. They can wear them with casual dresses.

Due to a wide range of colours, these shoes look stylish and appealing. These can go almost with every type of dress except formal and party dresses. The lace design and the front logo are also attracting.

The sole looks as it is made from different pieces. Every piece has a different colour and texture which looks attracting.

The upper of the New Balance 997 is made from different materials that include suede, blush leather and mesh. There is mesh in the middle which makes the shoe breathable. The front upper part is made with suede which can bear scratches. You will see blush leather at the back and a little in the middle. This type of leather has a shiny look. The lace design is also unique with an easy tightening feature. There can be different material in different variants of the New Balance 997.

This midsole is extra comfortable. There is a special technology that is called as Abzorb. This technology has extra cushioning to provide comfort to the user. It absorbs the impact and shock. It is present at the heel and forefoot of the shoe. Thus, you get a soft and smoother ride. It also protects the user from any impact.

Moreover, the sole is of ENCALP technology. It is a polyurethane shell that keeps the cushioning and inner material safe. It makes the shoes durable.

You will also find a motion control device on New Balance 997 Sports which provides greater stability for people with flat feet.

The outsole of New Balance 997 is made has a very good grip on the ground. It allows you to walk with ease. It is also a bit inclined from the front for easy walking, travelling, running etc.

A Brief History of New Balance 997

New Balance has a history of nearly 30 years. It was first designed in the 1990s. The first 997 had a polyurethane sole which was different from other soles of the 99x family. So, it was something new to 997. The shoe was made from suede, leather and mesh. It had tri-density outsoles for durability and grip.

In the 99x family, 997 was the first shoe for runners which was for females. It had proved to be good at running tracks. It remained in the market for almost 4 years. The company produced different colours styles in this period. Finally, it disappeared from the market. The place of 997 was taken by other shoes. It remained vanished for nearly two decades.

In 2008, New Balance took a stand with a Japanese company which was United Arrow. They introduced 997 with Abzorb technology of 998 and named the shoe as 997.5. United Arrows sold this shoe in Japan in their outlets. Finally, in 2011, it failed again due to market competition.

People wanted the come back of 997 and in 2014, 997 made a massive comeback. After this, the company made changes to make the shoe more comfortable with new and unique technologies. Now, New Balance 997 has different variants which are Sports, 997H, etc. There is a wide range of colours and shades. It is now one of the comfortable best sneakers in the market.

New Balance 997 is very comfortable and stylish due to its unique design and technology. The variants are available in all sizes for men, women and children. You can use them for casual dressing, running and sport depending on the variant you have selected. It is a bit expensive, but it worth it due to its lightweight, comfort, style and durability.

What do you think about the New Balance 997? Leave a comment and provide a rating with the rating scale just after the comment section.