The Reebok Classic Leather came out in the ’80s, the time when the popularity of a sneaker is based on its quality and functionalities. Reebok got the vibes of the ’80s athletes and designed Reebok Classic Leather to meet their needs. The shoe came back in the 2000s, and now known as more of a lifestyle sneaker. However, the versatility and low price tag of the shoe make it more popular. Reebok Classic Leather is now a dream shoe of every Reebok fans. However, it’s a shoe that many people are willing to add to their rotations.

Read more about the kick below.

Previous
Next
Buy On: Amazon
Buy On: Endclothing
Buy On: Finishline
Buy On: Footlocker
Features

In his first introduction, he voiced that the shoe looks like Adidas Yeezy Powerphase Calabasas. So, if you think the Yeezy is a bit expensive for you, this Reebok Classic leather is an option.

According to the card that comes with the shoe, it’s the people who wear the shoe that define it by bringing their own styles and personalities to it.

Fowler showed the all-white leather featuring multiple leather panels. He went on to show the two lines of perforations on the forefoot and said that the feature will make the shoe more breathable and suitable for summer wear.

He briefly ran through the stitching on the medial panels and went on to show the inner padding and the branded insole. He also introduced the leather heel cap and the EVA midsole. The rubber outsole is the last feature he quickly displayed.

He said going through to size would be good.

An on-feet review is somewhat important, and you shall have it before the end of the video.

The modern Reebok Classic Leather stands as a reminiscence of the original model. For people that were around when the shoe first came out, the new model brings nostalgic memory of the time they first fell in love with the Classic Leather kick.

The shoe is now more of a lifestyle rather than a performance shoe. Anyway, the versatility of it doesn’t give any chance to categorise it to a specific activity.

To cut the long story cut, the new generation is quite happy to see and cop the classic silhouette. It’s now the talk of many sneaker enthusiasts after wearing the shoe and felt it. Let’s hear what they’ve got to say below.

The following are a summary of what they think:

Rating breakdown is important as much as customer review. The shoe has been rated by many fans on a scale of 1 star to 5 stars.

The rating is intended to give people the idea of how well Reebok Classic Leather is doing.

Instead of information on a specific part of the shoe, the rating breakdown presents data that logically rate the shoe performance

Many customers have given their rating. Those ratings are presented in the bar chart below.

Each rating defines the level of the overall shoe performance in term of quality, comfort, satisfaction, and so on.

Have a look at how the sneaker enthusiasts have rated the shoe below. If you’re not satisfied with the review or the rating breakdown, you can always click through and check out the current reviews and rating breakdown on Reebok Official site.

At the time of this writing, 87% of customers recommended the product while the overall rating is 4.5 out of 5. It’s pretty okay, right? 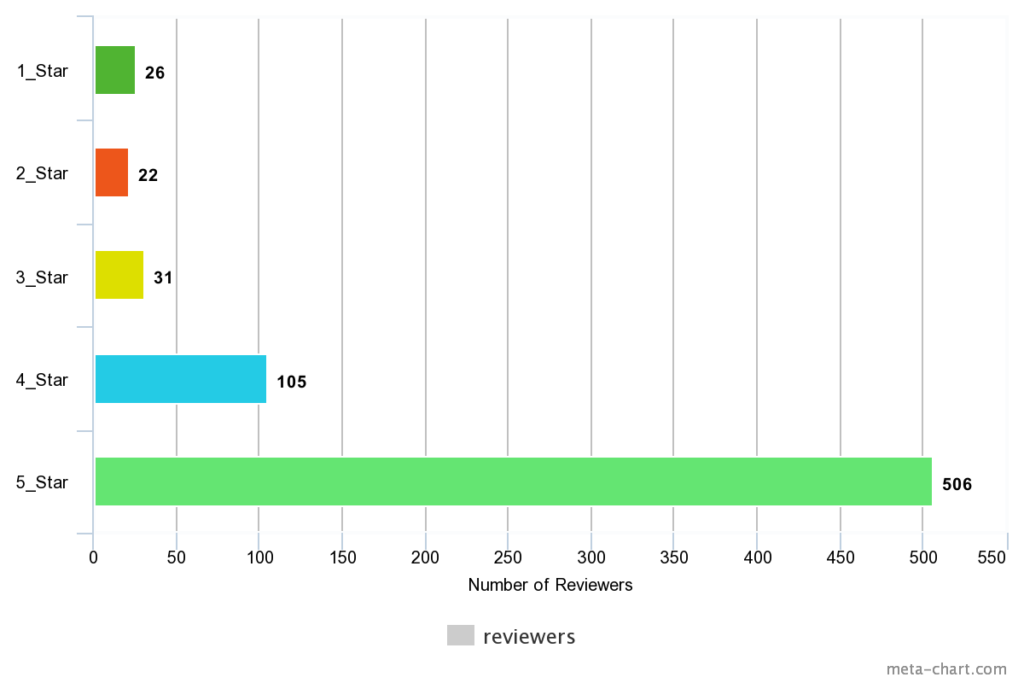 Reebok Classic Leather was a performance shoe that’s now used as a lifestyle sneaker. This 80s shoe was once one of the Reebok performance shoes but, over the years, new versions have been released to suit lifestyle purpose.

The modern Reebok Classic Leather is used more as a lifestyle sneaker. It’s still a versatile kick though.

Reebok celebrated the shoe 30th years anniversary with a new release about six years ago. The Reebok Classic Leather 30th Anniversary is a sneaker many fans are willing to pay any amount just to add it to their rotation.

So far, after making a comeback in the 2000s, the shoe has been the subject of many collaborations. Among those collaborations are the hip-hop star, Kendrick Lamar, and Opening Ceremony.

The shoe does well in style. According to many wearers, Reebok Classic Leather almost goes with any outfit.

Let’s see what the upper, midsole and outsole of this classic silhouette is made of below.

First of all, the upper of the Reebok Classic Leather is made of leather. The lateral sides feature panels of leather with stitching detailing to increase the structural integrity of the shoe and at the same time makes it more stylish and fashionable.

It comes with two lines of perforations on the forefoot. Just like most classic footwear, it features a traditional lacing system. The flat lace matches the colour of the leather upper. Underneath the lace is a tongue featuring the Reebok logo detailing on the top. A cut-out panel also accents the Reebok signature at the lateral side of the kick.

The shoe features a heel counter for added support. A Reebok logo can be seen at the rear too. To add to the Reebok logos, the insole takes one. The collar is well padded to ensure great sleek feel. So, there shouldn’t be a complaint about the shoe rubbing against the foot and causing a blister. The padding should prevent such an issue.

There isn’t much to say about the midsole except that it’s a Die-Cut Eva(Ethyl Vinyl Acetate) midsole. Eva midsole is usually used in running shoes. It’s known for its lightweight, flexibility, toughness, strength and durability. The thermoplastic property of the material makes it usefulness quite versatile. It’s employed in shoes to offer protection and enable shock absorption.

The insole features a textile sock liner to increase comfort and support. 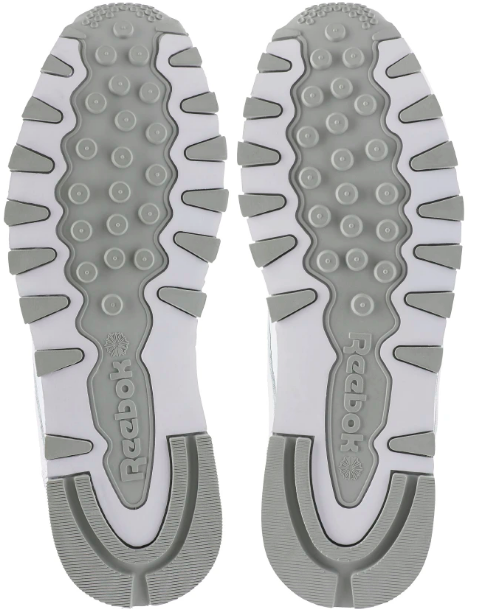 Nothing much to say about the outsole except it looks rugged and well constructed. It accents the Reebok logo at the heel area. The heel features a cocktail-like groove and there are quite a few button-like pods at the forefoot which make it more supportive.

Anyway, whatever they incorporated on the outsole do not make it looks bad at all. The fact that the rubber outsole is designed for durability and traction is what’s important.

The Reebok Classic Leather is a sought after kick for many sneaker enthusiasts. The shoe has been around for a while and has been proving itself as a timeless kick. It’s like a must-have shoe for many fans that are looking for a versatile, comfortable, reliable and lasting shoe.

Fans are quite happy with the price of the shoe. Though there are some people that think the leather upper is not good as it used to be, many reviewers feel like the leather is great.

There are many colourways of the Reebok Classic Leather which come from different collaborations. What’s more interesting is the choice of customisation given to an individual.

Hope this review has been helpful and useful. Please don't forget to leave a comment.

Nice it’s put together very well , statistics and all! I liked it.

Thanks. Hope you enjoyed reading it.

Hi there, I have always worn Reebok shoes and I don’t think I could bring myself to wear anything else on my feet if I’m honest.

You can’t go wrong with the classic Reebok trainer as they go with pretty much everything that I wear on a daily basis so why wouldn’t I buy Reebok shoes?

I have a pair of Reebok White & Green Club C 85 trainers on at the moment but I am always looking for new ones to buy so that I can change it up a bit and not wear the same pair twice in a row.

I think I have about 16 pairs of Reeboks, one of which is the Classic Leather, at the moment and 1 pair of Adidas (which my wife got me)

I am going to keep this website bookmarked to see the reviews of all the new shoes that Reebok brings out, Thanks 🙂

I like it when people write honestly and based on their experience. I found your review really interesting. My father is a Reebok lover, he would spend any money on getting Reebok products. He has two pair of those Reebok leather shoes, the white ones, and the black ones. He has been using these shoes for years and there is no way he can lend those shoes to anyone.

I will get mine anytime soon. After reading your review and based on my dads’ experience, those shoes are for sure one of the best investments you can make.

Good to know your dad likes the shoe. And, thanks for your opinion. Appreciate it.

Yeah, the kick looks great. It’s a must-have shoe for some fans.
You can also get it in women style or sizes.

The Reebok has been here for a very long time. Nostalgic indeed!

I don’t know if these are unisex shoes or are they just for men? Though women have  probably worn the Reebok brand without much thought.

One thing I’ll totally agree to is that the Reebok stye never goes of of style.

The shoe comes in both men and women size and style.

This looks like it is a good shoe all around.

This is a great website,The video is a nice touch.

You did a good job on the website, youhave all of your facts,

I don’t have any cons about this shoe, all Pros.

Thanks Melody. I appreciate that.

Reebok as a brand has always delivered high end quality shoes and their level of professionalism ocntinually shows despite the generational trend in vogue.

This reebok classic leather you have reviewed is great. The design and  the versatility it brings are features i admire most about it. I would definitely think of adding this to my shoe collections when my budget permits thanks

Am so marvel at the images of unisex shoes I saw on your blog,yours shoes are nice and classy, I will like to get some for myself.Thanks for giving me this opportunity to discuss this issue.

Glad you like what we have on the site, Teegal. Let us know if there’s anything we can help with.
Thanks for dropping by.

Well, you could try it on the product page.

Hey I want to know some idea about the replica clothes for sale. Can you share here.