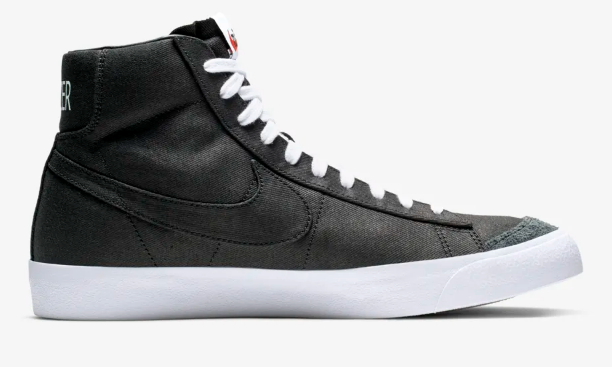 Early this year, Nike released the Blazzer Mid 77 Lucid Green including some other colourways. The release remind the fans of the ’70s and ’80s blazzer sneakers. It captures the retro look of the basketball shoes in the ’70s and ’80s.

To add to the colourways, Nike has decided to release new colourway, the Blazzer Mid 77 Black Canvas. There are other colourways coming with the Black Canvas: The “Sail” and the “Pink Foam”

The Blazzer Mid 77 Black Canvas features the traditional lacing system and will come with a tongue featuring the Nike logo. Unlike the previous versions, this one features black canvas upper. It also has a hairy suede overlay at the forefoot and the toe box just above the clean white.

The kick will be released this month. Have a look at the place to buy below.

This is a wonderful and carefully reviewed product. I actually read over and over in order to be convinced. Its only possible to have good result when all factors are put into consideration. I haven’t  bought Nike Blazzer Mid 77 Black Canvas but i fell in love with the product from this review of yours. I think i would have to get it for my husband. Thanks for the eye opener

Thanks for your feedback. I’m glad you like the review.

If you want to surprise your husband with this, click the affiliate link get it from Nike tomorrow.

Let me know if you need any help.

These shoes look both incredibly stylish and super comfortable, and I love the way you discuss the history of the 70s and 80s blazer shoes as well as basketball shoes. It’s almost available now, getting super excited and starting to count down the time. Thanks for sharing the information on this post.

Wow! This is dope! Thank you for sharing this great opportunity with us. I am making my order straight away… I love sneakers and i love every shade of them. I love the colour combination white and black and i know this sneakers will fit every casual outfit. I can’t wait to own my pair.
Thank you so much for sharing this post.

Let me know if you need a hand.